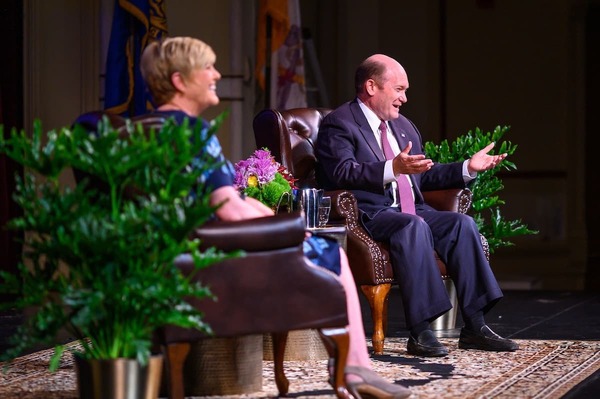 The University of Notre Dame opened the 2021 Notre Dame Forum on Friday (Sept. 10) with an announcement from President Rev. John I. Jenkins, C.S.C., that the University has committed to reaching carbon neutrality by 2050 and by 2030 will reach a 65 percent reduction in carbon output based on 2005 levels.

NBC News’ chief environmental affairs correspondent, Anne Thompson, and U.S. Sen. Chris Coons, co-chair of the bipartisan Senate Climate Solutions Caucus, followed the announcement with a conversation about the many impacts of the global climate crisis along with potential political and social solutions.

The event, titled “Call to Action: Crossing the Political Divide to Address Climate Challenges,” featured Thompson and Coons exploring the global climate crisis broadly while also focusing on changes big and small that could help turn the tide.

Watch the Video   See Photos   Read about the Speakers

Thompson, a Notre Dame alumna and Trustee, opened the conversation by recapping many of the recent environmental disasters and saying, “This forum could not be more timely after the week that climate change hit home in America.”

When asked if the political will to do something about the climate crisis has changed, Coons indicated that he thought it has, “but the challenge is that it has not been changing fast enough,” he said. Citing significant technology breakthroughs on various sustainability fronts, such as solar, wind and other renewable energies, the senator broadened the conversation to focus on the moral and human toll.

“I want to celebrate the wins we’ve had while recognizing that the urgency of this moment demands we do more. The world is on fire,” he said. “Climate change impacts people in uneven ways.

“Is there a moral imperative to address climate change? I think there is absolutely. You can’t possibly ignore the crises that are ravaging our world right now. We are living through the middle of three crises at the same moment, a global public health pandemic, a global refugee crisis and climate change.”

Thompson and Coons discussed the interconnectedness of these crises.

“Climate change, frankly, is a reminder of how inequality is exacerbating the other two,” Coons said, “and how our global interconnectedness is driving and fueling the other two, and is at the root of so much suffering around the world. I’ve recently been to countries in the developing world and seeing how climate is driving migration, poverty, loss of life, loss of opportunity. And we have to see how all of this is connected, and we have to hear a call toward a just transition.”

Coons offered insight into what some view as potential solutions to the climate crisis — instituting a “carbon tax” on businesses and industry or pursuing carbon capture and sequestration. He covered some of the political, logistical and global economic impacts surrounding the two options.

“If taken to scale effectively,” he said, “carbon capture and sequestration would allow for some fossil fuel — in particular, natural gas — to continue for decades. Some argue that that’s a terrible idea, that we should instead just abandon fossil energy altogether and keep it in the ground. I honestly don’t think that is practical, at scale for the world. I think the infrastructure that we already have built out for fossil fuels is so massive and so expensive and so central to most of the economies of the world that we have to have carbon capture and sequestration as part of the transition. And direct air capture, which is currently insanely expensive, will ultimately be a part of the solution at scale, but in a few decades.”

Both Coons and Thompson encouraged the audience to challenge themselves, family members and friends to do their part for a sustainable future. “Push your parents and your grandparents hard,” Coons said. “How can students have an impact? Research, serve and engage (in sustainable practices), but push your organizations and your parents.”

“We must regain the conviction that we need one another, that we have a shared responsibility for others and the world,” Thompson said. “And that being good and decent are worth it. So go out and talk to your parents and convince them. Remember to care for each other and be sure you care for the planet.”

Referring back to the carbon neutrality announcement from Father Jenkins, Coons said: “For this institution, to declare it will be carbon neutral by 2050, and it will make massive reductions in its carbon footprint, at the same time that it is a growing campus, is a remarkable and important thing. So let me just simply say thank you to Notre Dame.”

First elected to the Senate in 2010, Coons has made climate challenges one of his legislative priorities. In addition to founding and chairing the bipartisan Senate Climate Solutions Caucus with Sen. Mike Braun, Coons has led several pieces of bipartisan legislation, including the Energy Savings Through Public-Private Partnerships Act, Partnerships for Energy Security and Innovation Act and the Financing Our Energy Future Act, which would take important steps to support energy efficiency and clean energy research, development and deployment.

Coons earned his bachelor’s degree in chemistry and political science from Amherst College, his Juris Doctor from Yale Law School and a master’s degree in ethics from Yale Divinity School. He serves on the Senate’s Appropriations, Foreign Relations, Judiciary, Small Business and Entrepreneurship, and Ethics committees.

The environmental affairs correspondent for NBC News since 2007, Anne Thompson covered all aspects of the Deepwater Horizon oil spill in the Gulf of Mexico and has traveled the globe reporting on alternative fuels, global warming, land usage, new technologies and other topics related to the environment and climate change. She previously served as chief financial correspondent for NBC News and is the recipient of the Gerald Loeb Award for distinguished business and financial journalism.

A Notre Dame graduate and a member of the University’s Board of Trustees since 2010, Thompson was a reporter for four years at WNDU-TV in South Bend, as well as with the NBC affiliates in St. Louis and Detroit.