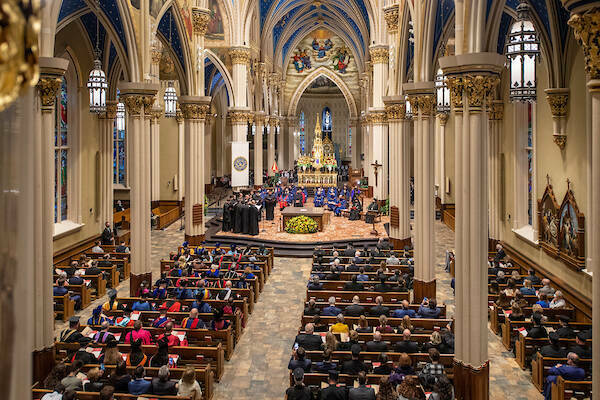 In an academic convocation at the University of Notre Dame’s Basilica of the Sacred Heart on Thursday evening (Oct. 28), His All-Holiness Bartholomew, Archbishop of Constantinople-New Rome and Ecumenical Patriarch, received an honorary degree from the University and offered an address on environmental sustainability and the COVID-19 pandemic. The ecumenical patriarch was unable to give the commencement address to the University of Notre Dame class of 2020 as originally scheduled due to the pandemic.

Notre Dame President Rev. John I. Jenkins, C.S.C., welcomed the ecumenical patriarch, saying it was a “historic moment in the life of Our Lady’s University” and an extraordinary honor for the Notre Dame family.

Watch the Video   See Photos   Read about His All-Holiness

“The ecumenical patriarch is celebrated around the world for his commitment to interfaith dialogue, for his dedication to peace, for his defense of religious liberty, and for his support of migrants and all who are marginalized and for his witness that a crime in the name of religion is a crime against religion,” Father Jenkins said. “Patriarch Bartholomew is especially revered for his prophetic voice on the environment which equates love of the creator with devotion to his creation.”

Ecumenical Patriarch Bartholomew, the spiritual leader of 300 million Orthodox Christians worldwide, was elected the 270th archbishop of Constantinople and ecumenical patriarch in October 1991. His tenure has been highlighted by ecumenical and interreligious dialogue — including formal visits with Roman Catholic, Orthodox, other Christian, Jewish and Muslim leaders — as well as efforts to promote religious freedom, human rights and protection of the environment.

The convocation was convened by Marie Lynn Miranda, the Charles and Jill Fischer Provost at the University of Notre Dame, and featured a concert in honor of the ecumenical patriarch, “Creation: From Adam to Salvation,” performed in Greek and English by the Archdiocesan Byzantine Choir.

In conferring the degree of doctor of laws honoris causa, Father Jenkins recognized His All-Holiness Bartholomew’s “steadfast Christian witness through three decades as the ecumenical patriarch.”

“For 30 years you have served on the ecumenical throne and have been a steadfast and inspired leader of Orthodox Christians worldwide and a remarkable light to all nations and peoples,” Father Jenkins said. “You have been courageous in your call for unity among Christians, for eternal respect among all women and men and a shared commitment to the common good. You have been profoundly and particularly prophetic in your call for protection of the environment, leading the world’s institutions and religious communities to greater sensitivity in action on behalf of our common home, and we cannot fail to acclaim your leadership on behalf of the fundamental right of religious freedom.”

The ecumenical patriarch addressed an audience of Notre Dame students, faculty and staff, as well as hierarchs of the Orthodox Church and members of the delegation from the Ecumenical Patriarchate of Constantinople, on the global challenges of climate change and the coronavirus pandemic.

Both crises, he said, present not only an unprecedented problem, but an unparalleled opportunity — and that the role of the Church is paramount.

“It is an important but humbling lesson that the Church has learned during this time: Namely, that religion must function and serve in connection with — and never in isolation from — science,” the ecumenical patriarch said. “Faith alone will not overcome the problems of our time, but the challenges of our time will certainly not be overcome without faith. Research and medicine are gifts from God; they supply answers to the question ‘how?’ Faith and theology are also gifts from God; they provide responses to the question ‘why?’”

Ecumenical Patriarch Bartholomew also spoke of the “ecumenical imperative” of the Church’s response, stating that faith leaders are called to cooperate with leaders in the scientific and academic worlds, as well as the corporate and political domains.

“This interconnectedness reminds us that the earth unites us beyond any doctrinal, social or cultural differences,” he said. “The power of ecumenical dialogue lies in opening up beyond ourselves and our own interests, beyond our confessions or religions. It means learning to speak the language of care and compassion. And creation care brings us divided, insulated believers before a common task that we must face together.”

“And on this journey, it is you — college students — that offer us the optimism that we so yearn for: the readiness to accept change and sacrifice, the capacity to overcome polarization and partisanship, the conviction to be catalysts of social and ecological justice, as well as — quite frankly — the opportunity to save democracy and our planet. May God grant your generation the necessary wisdom and courage to continue leading this charge and mandate.”

The Ecumenical Patriarch is the spiritual leader of 300 million Orthodox Christians worldwide, with a church history that dates to the Day of Pentecost and the early Christian communities. The apostle Andrew founded the church in A.D. 36 in the city then known as Byzantium, later Constantinople and today Istanbul.

Ecumenical Patriarch Bartholomew was elected the 270th archbishop of Constantinople and ecumenical patriarch in October 1991. His tenure has been highlighted by ecumenical and inter-religious dialogue — including formal visits with Roman Catholic, Orthodox, other Christian, Jewish and Muslim leaders — as well as efforts to promote religious freedom, human rights and protection of the environment.

Known as the “Green Patriarch,” he has said: “For human beings to destroy God’s creation, degrade the integrity of the earth and contaminate the planet’s waters, land and air — all of these are sins.”

The recipient of 35 honorary degrees, Ecumenical Patriarch Bartholomew was honored in 1997 with the Congressional Gold Medal, the highest civilian award bestowed by the U.S. Congress.

Ecumenical Patriarch Bartholomew’s visit to the United States this fall, his first in 12 years, marks the 30th anniversary of his election as Ecumenical Patriarch. The Apostolic Visit will inaugurate the Centennial Celebration of the founding of the Greek Orthodox Archdiocese of America which will be observed next year across the country. In addition to his visit to Notre Dame, Ecumenical Patriarch Bartholomew will meet with President Joe Biden and other senior government leaders in Washington, D.C., and raise a cross on the rebuilt St. Nicholas Greek Orthodox Church in New York, destroyed in the terrorist attacks of Sept. 11, 2001. He also will preside at a service at St. Andrews Greek Orthodox Church in South Bend.

Ordained to the diaconate in 1961 and to the priesthood in 1969, Ecumenical Patriarch Bartholomew served as an assistant dean at the Theological School of Halki for four years, then was appointed personal secretary to the late Ecumenical Patriarch Demetrios. He also served as metropolitan (the leader of a diocese or archdiocese) of Philadelphia and the metropolitan of Chalcedon.